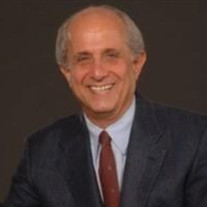 MICHAEL TOPF Although he was born in Newark, New Jersey on September 16, 1942, Michael Topf (77) of Narberth, Pennsylvania lived most of his life in the Philadelphia area and died at home on May 17, 2020 a little more than three months after... View Obituary & Service Information

The family of Michael Topf created this Life Tributes page to make it easy to share your memories.

MICHAEL TOPF
Although he was born in Newark, New Jersey on September...

Send flowers to the Topf family.