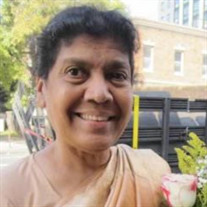 Indira James David Indira Vimila James was born on September 15, 1944, in Hyderabad, Andhra Pradesh, (Telangana) India as the fourth of five children. Her father, Ballikourava Akbar James worked for the government and her mother, Soubhagyam James, was a teacher. Indira had a close connection to her parents and siblings and encouraged this in her family. Growing up she loved decorating and was a social butterfly; funny and popular to both her friends and family and loved by all. Indira became a Seventh-day Adventist in her early twenties after being invited to a revival meeting in her hometown. After earning a Bachelor of Science in Biology at Nizam College Indira began her Master of Science studies in Osmania University, where she secured First Class. She completed her master’s degree at the age of 21. While pursuing her Ph.D. in 1968, she met Joshua David who she married on January 9, 1969. Later that year, now Mrs. David paused her studies and left India for Dallas, TX in support of the blossoming research career of her husband. Now, Dr. and Mrs. David, they moved to Houston in 1972, and finally, in 1974, settled in Philadelphia where Dr. David continued his career, and Mrs. David raised their growing family. In 1971, Dr. and Mrs. David welcomed their first daughter, Ellen Suhasini and in 1975, were blessed with their second daughter, Elizabeth Vilasini. Their son, Zakkam Samuel, completed the family 15 months later in 1976. With her husband, Mrs. David was very active in the Adventist church and raised their children in the faith, as well. After her children left home, Mrs. David remained active in the church as a Deaconess, Sabbath School Superintendent, and both Sabbath School and Vacation Bible School teacher. Indira was a spiritual woman of prayer who began and ended each day in commune with God. Mrs. David believed strongly in being home while her children and home schooled them until each was eight years old. Believing that 8 was the appropriate age for classroom schooling, the children were enrolled in grade school where they excelled in testing after her tutelage. Once her children were attending school, Mrs. David recommenced her career at the Scheie Eye Institute as a scientist. After experiencing the pleasure and success of educating her children, Mrs. David decided she did not want to return to the research arena, and decided to focus on her true passion, teaching. She became actively engaged in the church as a Sabbath School teacher and obtained her credentials to work as a substitute teacher. After teaching in the Philadelphia school system, she retired from teaching in 2015. Mrs. David enjoyed cooking, her church family, and lively debate but mostly enjoyed time with her family, especially with her grandchildren, Lucas and Bella, and dogs Coconut and Cashewnut. Although she now waits with her husband, she is survived by her children, Ellen Leider (Paul), Elizabeth David and Samuel David, and sister Urmila Franklin (Benjamin) and brother Prahlad James (Naty). Relatives and friends are invited to her Visitation and Service on Friday, April 22nd, from 10:30 a.m. to 1 p.m. at The Boulevard Seventh Day Adventist Church. Interment will follow at Lawnview Cemetery. Video Streaming of the Service may be found at either link below: http://facebook.com/BlvdSDAChurch https://youtube.com/channel/UC2KnAUO7kruZIIREdmQXzKQ

The family of Indira David created this Life Tributes page to make it easy to share your memories.

Send flowers to the David family.