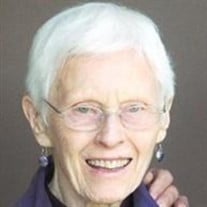 Hazel B. Lovett, age 96, has died in her home at Pennswood Village in Newtown, Pennsylvania. Born in 1925 in Exeter, New Hampshire to George Bean and Mabel Larkin, Hazel attended Robinson Female Seminary. She went on to the McLean Hospital School of Nursing in Boston, graduating as a Registered Nurse in 1947. While a student nurse, Hazel met Jim Lovett and they were married on August 22, 1946. In 1948, the two joined the American Friends Service Committee and travelled to Henan Province in north central China to help run a hospital in the village of Chungmou. Their remarkable experiences included crossing the communist lines during the Chinese Revolution and a period of incarceration based on misunderstandings with local officials, but their lasting memories were of respected Chinese co-workers and life in a very different time and place. After returning to the States in 1951, daughter Stephanie was born and Hazel continued to work as a nurse while Jim attended college and graduate school. In 1960, the family moved to West Lafayette, Indiana where Hazel was active in Democratic Party politics, serving as Secretary to the Democratic Central Committee and manager of the Tippecanoe County Democratic Party headquarters. She also served as board member and secretary of the Board of the Greater Lafayette Community Centers, and volunteered with various organizations including Planned Parenthood. When Jim became executive editor of the Journal of Mycology, Hazel became his editorial assistant. Hazel and Jim made their final move in 1995, to the Pennswood Village retirement community. Sadly, Jim died in 1997, not long after he and Hazel celebrated 50 years of marriage. She continued to put her nursing expertise and sense of service to use, serving on Pennswood’s healthcare advisory committee and as a resident member of the corporate board. She loved her community and served friends and neighbors by accompanying them to medical appointments and helping them understand their diagnoses and medical options. Hazel passed away on April 17 after a short illness. The family thanks the staff of Pennswood Village, especially the nursing staff, for their gentle care of her and us during her final days. Hazel’s husband, parents, brother Everett and sister Louise preceded her in death.  She is survived by her daughter, Stephanie and son-in-law Ken Wallace of Helena, Montana, and cherished nieces and nephews. No services are scheduled at this time. In lieu of flowers, please consider a donation to Planned Parenthood or the American Civil Liberties Union.

Hazel B. Lovett, age 96, has died in her home at Pennswood Village in Newtown, Pennsylvania. Born in 1925 in Exeter, New Hampshire to George Bean and Mabel Larkin, Hazel attended Robinson Female Seminary. She went on to the McLean Hospital School... View Obituary & Service Information

The family of Hazel B. Lovett created this Life Tributes page to make it easy to share your memories.

Hazel B. Lovett, age 96, has died in her home at Pennswood Village...

Send flowers to the Lovett family.