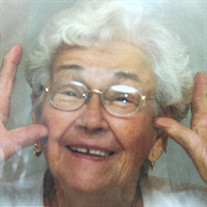 CANCELLIERE Clara Gloria (nee Cinalli). A resident of Philadelphia, PA, Clara passed away on September 24, 2020. Her husband Samuel Cancelliere preceded her in death. She was the beloved mother of sons, Richard and Thomas Cancelliere, grandmother of Michèle Cancelliere Carter (Tim), Aimée Cancelliere Russomano (Frank), Christopher and Chelsea Cancelliere, great grandmother of Liam and Elsa Carter, and Luca Russomano, and aunt to many loving nieces and nephews. She was preceded in death by her siblings, Santa "Sandy" Bardi, Biagio "Bissi" Cinalli, Nicholas "Nicky" Cinalli Sr., Venere "Vincent" Cinalli, Angela "Angelina" Maialetti, Louis "Gigi" Cinalli, Anthony "Tony" Cinalli Sr., Luzio "Luzi" Cinalli, and Mary McCusker. Clara was born in Fairmont, West Virginia, on September 19, 1920 to the late Pasquale Cinalli and the late Carmela Celiberti Cinalli, both immigrants from Atessa in the Abruzzo region of Italy. She was the 10th of 11 children and the last survivng member of her family. Before the age of 10, Clara and the Cinalli family moved from the coal mining region of West Virginia to the Port Richmond section of Philadelphia. In 1943, she married Sam Cancelliere and planted roots in the Tacony section of Philadelphia. There they bought their first and only home and raised their two boys. Clara called Tacony home for over 70 years. Those who knew Clara knew she was always on the move, even up till her last days. She loved to cook and she loved visitors. She especially loved to cook for her visitors, and she made A LOT of food. True to her Italian heritage, she'd be making trays of ziti, lasagna, raviolis, meatballs, etc. You name it. When it came to Christmas, you had better make room for Clara's cookies. Some of her favorites were cowboy cookies, Italian iced wedding cookies, caggionetti (aka gotchanets) and pizzelles. Food = love. Most of all though, Clara LOVED her family and every member in it. She was so proud of them and told anyone who'd listen. Whenever you were with her she always made you feel like you were the most important person in her life--she was so present in each moment. Her grandkids were "spoiled rotten" by her. Whatever they wanted to eat at grandmom's, they got. Clara always said how she "just wanted to live to see her great grandchildren." That wish came true and her great grandchildren got such a kick out of "Granny." She was vivacious and her personality was infectious. Her children and grandchildren inherited her goofiness and creativity too. She loved a good joke and being silly. She liked to draw, play bingo and sing. And in the last few years of her life as her memory began to fail her, her favorite song to sing became "Getting to Know You" from Rogers and Hamerstein's The King and I. Amazingly, Clara had just recently celebrated her 100th birthday. She will be so dearly missed, but never, ever replaced or forgotten. A Memorial Service is pending, but those who wish to celebrate Clara's life are asked to light a candle on Saturday, October, 10th at 1:00 P.M., take a deep breath and sing/listen to "Getting to Know You." Contributions in her memory can be made to a charity of your choice.

CANCELLIERE Clara Gloria (nee Cinalli). A resident of Philadelphia, PA, Clara passed away on September 24, 2020. Her husband Samuel Cancelliere preceded her in death. She was the beloved mother of sons, Richard and Thomas Cancelliere, grandmother... View Obituary & Service Information

The family of Clara Gloria Cancelliere created this Life Tributes page to make it easy to share your memories.

Send flowers to the Cancelliere family.