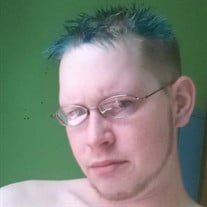 Andrew Patrick Tuohy Obituary Andrew Patrick Tuohy, of Philadelphia, passed away suddenly but peacefully on August 12, 2021 at the age of 38. Andrew was a loyal friend and devoted son who enjoyed cooking, working on his car, skateboarding, Marvel and horror movies, and martial arts. He and his cat, Tigger, were inseparable. Andrew was born and raised in Holmesburg and graduated from Lincoln High School, where he made many lifelong friends. As a kid, his nickname was “Lunchbox” because he could eat voraciously without gaining weight. As he got older, he became a skilled cook, and worked at The Ashburner Inn for many years in that capacity. He was especially devoted to caring for his late mother, Mary, who suffered from a debilitating long-term illness. He is survived by his father, Francis Matthew Tuohy, Jr., and his older brother, Francis Matthew Tuohy III, both known as Frank. His mother, Mary (Orr) Tuohy, predeceased him in March 2020. He is also survived by his Aunt Marge and cousin Richie of Newportville, PA; his Aunt Pat and Uncle Bob, also of Newportville; his cousin Gene, Gene’s wife Dawn, and their children Aubri, Jacob, and Jayden of Marlborough Beach, Florida; his cousin Tony, Tony’s wife Maria, and their son Anthony of Eastampton, NJ; his Uncle Charlie, Aunt Lori, and their children Michael and Faith of Downington, PA; his Uncle Jimmy and Aunt Sharon of Philadelphia, PA; his cousin Justin, Justin’s wife Courtney, and their children Ben and Lily of Jackson Heights, NY; his cousin Noelle, Noelle’s husband Eric, and their children Nora and Olivia of Downingtown, PA; his cousin Kara of Boston, MA; and his aunt Kay of Media, PA. Relatives and friends are invited to a viewing on Friday, August 20, from 2-4 pm. In lieu of flowers, memorial contributions may be sent to the Juvenile Diabetes Research Foundation, https://www.jdrf.org/.

Andrew Patrick Tuohy Obituary Andrew Patrick Tuohy, of Philadelphia, passed away suddenly but peacefully on August 12, 2021 at the age of 38. Andrew was a loyal friend and devoted son who enjoyed cooking, working on his car, skateboarding, Marvel... View Obituary & Service Information

The family of Andrew Patrick Tuohy created this Life Tributes page to make it easy to share your memories.

Send flowers to the Tuohy family.