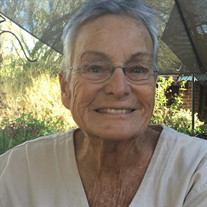 Nancie Lee Healy (Trotman), born in Camden, New Jersey on August 13, 1930, passed away on June 15, 2020 in West Chester Pennsylvania. Nancie attended the Charles E. Ellis School for Girls and the University of Pennsylvania. Nancie was wife for 43 years to John D. Healy (d. 1993); and a loving mother of eight children Debra (Larry Davis), Douglas, Diane (Charles Wenzel), Davina (Robert Sebera), Duncan (d. 1983), Daphne (d. 1962), Dorinda (Gregory Chait), Dierdra (Stephen Mazurek), and ten grandchildren. Nancie and John met in Ocean City N.J. in the summer of 1947, and they were married in Philadelphia in 1949. No matter where their family lived they always tried to summer in Ocean City. After Nancie’s husband retired from the Philadelphia Orchestra 1989, they moved to Tucson, Arizona. Nancie was an active and beloved member of her community (Sun City Vistosa). Nancie filled her days hiking and swimming. In 2018 Nancie returned to the Philadelphia to be closer to family. As the wife of a Foreign Service Officer, Nancie’s life took her around the world, but her love for traveling didn’t stop there. After her husband’s death Nancie took many hiking trips, traveling to numerous national parks in addition to international hikes such as 350 miles of the Camino de Santiago Pilgrimage in Spain as well as treks in Peru, New Zealand, Thailand, China, Tibet and more. Nancie always had an intrepid sense of curiosity, open mindedness, and appreciation for world culture, art and music which she has imparted on all who knew her well. In lieu of flowers, donations can be made to the National Park Foundation. Due to the current health crisis, a Celebration of Life will be held at a later date.

The family of Nancie Healy created this Life Tributes page to make it easy to share your memories.

Send flowers to the Healy family.