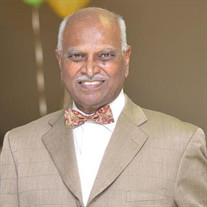 JJOSHUA SUVARNA KUMAR DAVID, Ph.D., M.D. 4/30/1937 - 4/12/2022 It is with great sadness that we announce the sudden passing of Joshua Suvarna Kumar David on April 12, 2022. He was a kind and spiritual man devoted to his family and church, who touched the hearts of everyone he met. Dr. David was born on April 30, 1937, to Prema and Zakkam David in a small town in the Anantapur district of the Indian state of Andhra Pradesh. He was the sixth of eight children, was especially close to his mother and loved spending time with his siblings. He had an affinity for Indian movies and particularly loved the music and singing classic Indian songs. After graduating high school, Dr. David went on to study biochemistry earning a M.Sc. from Banaras Hindu University in the Uttar Pradesh district of India. The family was close. To help with tuition his eldest sister sold her jewelry that she loved. He then went on to earn a Ph.D. from the prestigious Indian Institute of Science in Bangalore. With degrees in hand, in January 1969 he met and married the love of his life, the beautiful, loving, and funny Indira James. Dr. David and Mrs. David were inseparable from the moment they met and moved to America later that year. Dr. David worked on NIH grant funded projects during this time with infamous doctors Dr. DeBakey and Dr. Gotto in Texas. Their first daughter was born in Dallas in 1971. Their second daughter was born in 1975 and son was born in 1976, in Philadelphia where they established their roots. Dr. David worked very hard to provide a good life for his family. In 1980 the family moved back to Texas, where Dr. David pursued his dream to become a medical doctor. After earning his M.D. in 1982, the family moved back to Philadelphia where he did his residency at Episcopal hospital. He received an NIH grant to perform cutting-edge cholesterol research at Presbyterian hospital before going into internal medicine in a private practice for the rest of his career. He used his medical expertise and gentle demeanor to care for poverty-stricken patients in need. He retired in 2010. He helped open and operate multiple health clinics in Anantapur India associated with the Seventh-Day Adventist church. Dr. David loved spending time with his family including his three children and two grandchildren. He was a well-respected member of the church and was beloved by all. He was passionate about spirituality and health and served as a church elder where he led the church for over a year as head elder while searching for a pastor. He often spoke to the church and his family and friends about the importance of a plant-based diet and natural healing of the mind, body, and soul. He walked every day to stay in shape. Always positive and grateful, Dr. David used his wonderful sense of humor and compassionate understanding to bring joy and peace to all he met. He prayed every day with his wife, leading prayer groups with church members and also whenever he was with his children and grandchildren. He was also an avid gardener and world traveler, visiting his family throughout the world and his children in California, Florida, and Maryland. Dr. David is survived by his wife Indira, his three children, Ellen (Suhasini) and her husband Paul and two grandchildren, Lucas and Isabella, Elizabeth (Vilasini), Samuel (Zakkam), and his sister Dr. Nalini Jacob. A viewing will be held Friday, April 22, 2022, from 10:30 AM to 12:00 PM, followed by a funeral service from 12:00 PM to 1:00 PM, at Boulevard Seventh-Day Adventist Church, 8441 Roosevelt Boulevard Philadelphia, PA, 19152. A committal service will be held at 2:00 PM at Lawnview Cemetery, 500 Huntingdon Pike, Jenkintown, PA, 19046. "The purpose of life is to believe, to hope, and to strive." -Indira Gandhi Video Streaming of the service may be found at either link below: http://facebook.com/BlvdSDAChurch https://youtube.com/channel/UC2KnAUO7kruZIIREdmQXzKQ

The family of Joshua Suvarna Kumar David created this Life Tributes page to make it easy to share your memories.

Send flowers to the David family.