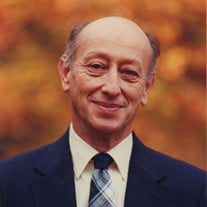 John Joseph Beer, 94, died quietly on October 2nd, 2021 at the Kendal retirement community in Kennett Square, Pennsylvania. Known for the twinkle in his bright blue eyes and his expressive face, John was curious about everything and welcomed everyone he encountered. When he asked someone about themselves or about their world, he really wanted to know. John and his wife Fran lived in Newark, DE for 41 years, where they raised their four children. He taught History at the University of Delaware, was a founding member of Newark Friends Meeting (Quakers), and engaged in peace and justice activism throughout his long life. Born in St. Ingbert, Saarland (now Germany), his Jewish family fled to Paris, then emigrated to New York City in 1937, where young John was delighted to see their family name in store-front lights everywhere! In the 1940s, the family operated an egg farm in Vineland, NJ. John graduated from Vineland High School in 1945 and immediately joined the Navy. After a stint on an aircraft carrier in the Pacific, he was transferred to Washington D.C. for the mundane task of translating secretly-opened postal mail “from German grandmothers to their children”. When he asked what the point was, he was told “we’re preparing for the next war.” This frank admission marked a turning point in his life-long commitment to pacifism. John studied Chemistry at Earlham College, where, while singing songs on the dining hall dish washing crew, he fell in love with Frances Nicholson. They married in 1951. He received an MS in Chemistry from the University of Illinois, then changed direction, earning a Ph.D. in the History of Science. He and Fran spent a year in Germany while he researched his dissertation and subsequent book, The Emergence of the German Dye Industry. After two temporary teaching jobs, he taught three years at Oklahoma State University, before moving to the University of Delaware for the rest of his career. An inquisitive extrovert, John loved teaching! He taught European history, with specialties in the history of science, technology, and chemistry. Over time he ventured into world history, and courses on new topics: Women in Science, the Atomic Age, and Gandhi, all with a focus on the ethical application of technologies. He entertained and challenged generations of students with his enthusiasm for any and all subjects, which he explored from both moral and intellectual angles. Outside of teaching, he worked to build a collaborative, collegial environment in his department and its Hagley Fellows graduate program. Grateful to the United States for providing him citizenship and a place to live a good life, John took his duties as a citizen seriously. He attended the 1963 civil rights March on Washington and its anniversary 50 years later. He corresponded regularly with his representatives, including Joe Biden. Much of his activism centered on opposing government-sponsored violence—protesting the war in Vietnam and all the US wars that have followed, and working towards nuclear disarmament and demilitarization. He and Fran vigiled overnight in Smyrna every time the state killed a prisoner. For 10 years, he waved his American flag and peace signs at the weekly Kennett Square vigil against the wars on Iraq and Afghanistan. John was a devoted Quaker, serving Newark Friends Meeting and other Quaker organizations in many capacities — participating in work camps, ministering, teaching Sunday School, preserving Quaker history, clerking committees, attending conferences, hosting student gatherings in his home, and mentoring students especially during the Vietnam War years. Research on iron and steel technologies took John to Eastern Europe, and he brought his family along to Munich for his year at the Deutsches Museum. Later he and Fran sojourned in Vienna, Birmingham, England, and Jerusalem, later enjoying travel farther afield with Elderhostel. They were always eager to visit museums and historical sites at home as well as new places. John also served as family historian, making use of his fluent French and German to maintain ties with faraway relatives. In 2002, he and Fran joined John’s three siblings at the Kendal retirement community. He continued to advocate for children with CASA in Wilmington, and cheerfully help out with projects at Kendal. Gardening gave him peace, resulting in baskets full of vegetables and bright flowers he set out for others to take home. Until his last week, John walked the large grounds of Kendal daily, admiring big trees and flowing water, and waving at all who passed by. John was preceded in death earlier this year by Fran, his wife of 69 years, by his parents, Lucy and Otto Beer, siblings Lise, Martin, and Hilda, and young daughter Carolyn. He is survived by children Jennifer, Sandra, Michael (Latanja), and Matthew (Elizabeth); and grandchildren Carolyn, Seth, Avery, Kian Thomasbeer, and Skye Thomasbeer. Donations in John's memory can be given to Pacem in Terris, or any other of the many organizations he participated in. John J Beer's memorial service will be held online, Saturday afternoon, November 13th. Anyone wishing the link should email [email protected]

John Joseph Beer, 94, died quietly on October 2nd, 2021 at the Kendal retirement community in Kennett Square, Pennsylvania. Known for the twinkle in his bright blue eyes and his expressive face, John was curious about everything and welcomed... View Obituary & Service Information

The family of John J. Beer created this Life Tributes page to make it easy to share your memories.

Send flowers to the Beer family.