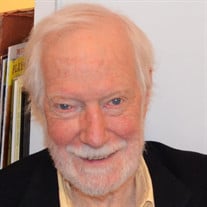 James Douglas Crawford, lifelong resident of Philadelphia, PA, died peacefully at home on June 10, 2022 at age 90. A brilliant lawyer and advocate, a loving husband, parent and grandparent, a voracious reader of histories, an energetic and... View Obituary & Service Information

The family of James Douglas Crawford created this Life Tributes page to make it easy to share your memories.

Send flowers to the Crawford family.