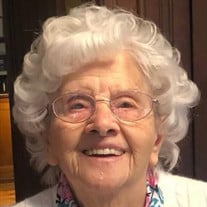 Helen Quickel Obituary Helen Quickel passed into eternal peace December 4, 2021 while comforted by her immediate family. She was 97. She was preceded in death by her husband of 44 years, Samuel Quickel. Helen leaves behind three children – Lois Yates (husband David), Gene (aka Butch) Quickel, and Janice Botterbusch (husband Fred), four grandchildren – Christopher Botterbusch, Lauren Botterbusch Hughes, John Morrison, and Michael Yates, and six great grandchildren – Frances Hughes, Frederick Hughes, River Yates, Lily Morrison, Thomas Botterbusch, and Emma Botterbusch. Most of these beloved family members visited her in her last days, as well as her nieces Vickie and Helen visiting in person and on Skype. Helen was born in Baltimore February 3, 1924. She did not have the most auspicious start in life. When she was one year old she was sent to Lutheran Tressler Orphanage Home (TOH) in Loysville, PA, along with two older sisters, Frances and Grace, and older brother Wallace. As she grew older, she tended to children in the Home’s nursery, often taking them for walks, and played basketball for the Home’s school. During summers, the children spent time at Camp Nawakwa. Helen graduated in 1941 and went to live in Baltimore with an aunt and her sister Grace. Her husband Sam Quickel was also a graduate of Tressler. The boys and girls were separated at Tressler, so they did not know each other well. Their relationship started at a TOH reunion. They were married on June 4, 1949 after which she moved to York where Sam was working on the Pennsylvania Railroad. For many years the Quickels lived on Duke Street in North York, within walking distance to St. Peter’s Lutheran Church, at which she was a member from 1949 (and always will be). Helen was a stay at home mom for her three children until Janice, the youngest started first grade. Then, she found work at GTE in York as an assigner. If you obtained a phone number in the East York area in the 60’s or 70’s or early 80’s (755 of 757), she probably assigned it. Helen was a wonderful cook. Sunday dinner was right after church. This is the way it was for decades at the Quickel household, even as the children grew up, married, and had their own children. Helen cooked and the Quickels and the Botterbusches and the Yates ate many Sunday dinners in a small kitchen enjoying the cooking and each other. We loved her crab cakes. Helen retired from GTE in 1986. After that, she took up golf. She played with a group of women at Grand View. Also, Helen and Sam often travelled around the area and neighboring states on golf outings, and spent their winters in Florida for more golf. After Sam passed in 1994, Helen forged ahead on her own. She volunteered at the York County Courthouse and SpiriTrust Lutheran for many years. She moved to SpiriTrust in 2009 where she continued to volunteer, folding linens with her good friend Bea Botterbusch. She was always energetic and looking for something to do. Notwithstanding her humble beginnings, Helen managed her 97 years well. She took care of herself and she invested wisely; always in a giving mind set. She was very much loved by her family and friends. The family cannot express enough gratitude for the Spirit Trust staff. Their kindness and attention to our Mother’s needs in her final days was tender, gentle, and moving. She was truly blessed to have to you nearby. A service will be held at St. Peter’s Lutheran Church at 10:30 AM on Saturday, December 11. In lieu of flowers, please consider a donation, no matter how small, to SpiriTrust Lutheran (specify Kelly), 750 Kelly Drive, York. PA 17404 or St. Peter’s Lutheran Church (specify General Fund), 947 North George Street, York, PA 17404. The family invites attendance only if you are vaccinated and will wear a mask.

Helen Quickel Obituary Helen Quickel passed into eternal peace December 4, 2021 while comforted by her immediate family. She was 97. She was preceded in death by her husband of 44 years, Samuel Quickel. Helen leaves behind three children &#8211;... View Obituary & Service Information

The family of Helen Quickel created this Life Tributes page to make it easy to share your memories.

Send flowers to the Quickel family.