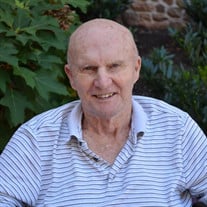 Glyn Rhys Williams, 82, son of Thomas Gwyn Williams of Pontardawe, South Wales, UK and Marjory Jean (nee MacLean) Williams of Adelaide South Australia, passed away in his Royersford home under the loving care of his wife on July 26, 2020. Glyn was born on March 11, 1938 in Luanshya Mine Hospital on the Copperbelt of Rhodesia. He was an active little boy growing up in Northern Rhodesia, often slipping away from his parents to be involved in mischief of all sorts. Growing up, he attended Whitestones Boys Preparatory School in Bulawayo, Southern Rhodesia where he learned to ride horses and his love of animals was stimulated, as well as Sakeji School which was run by the Bretheren (formerly Plymouth Brethren) and was situated at the source of the mighty Zambezi River where his love of swimming grew; then Codrington, a junior school in Mazabuka, where he made friends with so many of the farmer's sons, giving him a desire to farm. Glyn had a very short spell at Lusaka Boys School, then onto Gilbert Rennie Secondary School in the Kabulonga area, excelling at many sports including rugby, swimming, tennis, cricket, athletics, gymnastics and military cadets. Upon graduation from secondary school, all boys were required to attend a six months military cadet course, based at Heinie, Bulawayo, Southern Rhodesia, training with the Royal Rhodesian Regiment. Glyn attended Gwebi Agricultural College in Southern Rhodesia, now Harare, Zimbabwe, graduating in September/October 1959. Upon graduation, he was employed by the Northern Rhodesian Government. After a while, as did most young people at the time, he flew to England and spent time doing odd jobs in order to experience life in London and the UK. Glyn married in UK and returned to Lusaka with his young bride. That marriage was sadly short lived. He then spend some time working with the Dairy Marketing Board in Lusaka before starting his own business specializing in paint and air conditioning. He met Nancy Zyry who was working for the American Embassy; they married in the USA but returned to Lusaka to work, as well as have two children Daniel and Moira. Times in Africa were changing, so they decided to move to the USA in 1977 where Nancy was a citizen. Glyn achieved his citizenship in 1980. He worked for Bechtel Power Corporation, Peabody & Wind, then Pierce-Phelps before venturing out on his own. After that marriage dissolved, me met his current wife Charmaine and they eloped in Jamaica in July of 1996. Glyn remained physically active throughout his life, thoroughly enjoying fishing in the upper reaches of the Zambezi river in his younger days, as well as achieving his black belt in Karate. He was an avid golfer with a 7 handicap, and had a lifelong interest in photography and wildlife. He was very involved in his children's sports – swimming, diving, and soccer. Glyn was a lover of all animals, especially Rhodesian Ridgebacks, of which he had several throughout his life, including his current dog Elsa. Glyn is survived by his third wife Charmaine (nee Braig), children Daniel (Nicole) of Richboro PA, Moira (Carl) of Warrington PA, step daughters Jennifer (Paul) of Philadelphia and Kristin (Matt) of West Chester, three grandchildren and 5 step-grandchildren, sister Megan in Lusaka, nephew Ian in the Netherlands, and niece Tanya in South Africa. Memorial will be held for close family at the Washington Memorial Chapel in Valley Forge Park on Saturday, August 29th. In lieu of flowers, memorial contributions may be made to Outreach House, a Ministry of St. James' Episcopal Church. Outreach House is located at 147 Evansburg Road, Collegeville PA. 19426.

The family of Glyn Rhys Williams created this Life Tributes page to make it easy to share your memories.

Send flowers to the Williams family.