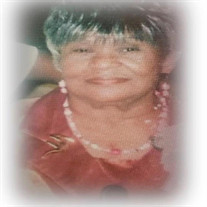 Obituary Daisy Dell Clark Daisy Dell Clark was born on February 16, 1926 to her late parents John Dobson and Lena Townsend, in Richmond Virginia, in the small county of Keysville, and peacefully passed away on Monday, June 15, 2020. Daisy was educated in the Virginia school system. Daisy decided to leave Virginia and moved up North, first to New York then made her way to Philadelphia in 1944, where she later met and married Odell Clark who preceded her in death and borne thirteen (13), children. Daisy was very proud of her family one of her greatest joys was to care for and nurture her children. As her children would say, "We can always find Mom at home whenever we needed her". As a matter of fact, even the children in the neighborwould flock to the back of the house when they would smell the aroma of her freshly baked biscuits. Daisy truly considered it to be a privilege to care for her household. Daisy was introduced to the truth in 1984. As she progressed in her study of God’s Word her love for Jehovah grew and she was moved to demonstrate her love; and symbolized her dedication to Jehovah by water baptism in January of 1985. From that point on in her life she proved her love and devotion to Jehovah and the ministry. Daisy alongside three of her children continued a record of unbreakable faithfulness to Jehovah until her passing at 94 years of age. Daisy enjoyed music, shopping and spending time with friends, and especially her family. One of the outstanding memories Christopher had as a young boy; was sitting at the table with his siblings eating, he recalls looking up at her and asked where is your food? Daisy replied, “Don’t worry, you all go ahead and eat”; he recalls, that while collecting the plates off the table she would scrape all the remains from their plates; and that would be her dinner. Daisy’s children were truly her life. Daisy’s smile and sweet disposition will forever be missed. Something we look forward to, in God’s New World” Daisy had five of her children, Elizabeth, Clyde, Julius aka Pumpkin, Adrian, Daisy and four of her grandchildren Abdul Karim, Christina, Dontel and AKee, all preceded her in death. She leaves to cherish her memories two of her siblings, Jessie and Novella, Eight children and their spouses, Christopher (Yvette), Donald (Phara), Irena (Dennis), Anita (Joel), Pete, Elijah (Catherine) Eva (John) and Deborah (Curry), Thirty-one Grandchildren, Sixty-one Great Grandchildren and Eighteen Great-Great Grandchildren,a host of nieces and nephews Sister Daisy Clark also leaves behind a host of close and dear friends and her beloved congregation, "The Fernrock Congregation" . Their will be a zoom service July 11, 2020 at Kingdom of Jehovah Witness, the Fernrock Congregation . Officiating the service will be Minister Steven Williams Family Acknowledgement We the Family, acknowledge, with grateful appreciation, the cards, prayers, visits, phone calls, personal words of kindness and expressions ofsympathy and support. These acts of kindness have helped greatly to console us during our time of bereavement. Sincerely, The Family

Obituary Daisy Dell Clark Daisy Dell Clark was born on February 16, 1926 to her late parents John Dobson and Lena Townsend, in Richmond Virginia, in the small county of Keysville, and peacefully passed away on Monday, June 15, 2020. Daisy was... View Obituary & Service Information

The family of Daisy Clark created this Life Tributes page to make it easy to share your memories.

Send flowers to the Clark family.