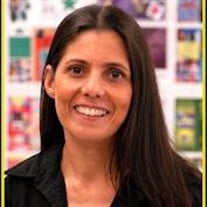 After courageously fighting cancer for many years, Antoinette Molnar died peacefully surrounded by family and friends on August 21, 2021. A native of Trenton, Ani began teaching Biology at Trenton Central High School in 1998 and always worked tirelessly to emphasize experimentation and laboratory work. Committed to her students, she continued to teach through her extended illness. One of her favorite units was environmental science, and she would take students to the local marsh to collect and test specimens of all kinds. In 2010 she traveled to Japan as part of the Fulbright Teacher Exchange program. During her summers, Ani coordinated and led science camps for middle school girls from Trenton and Philadelphia. When she wasn’t teaching, Ani enjoyed being outdoors hiking and camping, as well as working in her garden. She was a longtime member of the Morrisville Quaker community and the NY-based Peaceweavers. Ani is survived by her daughter Surya Molnar-Hendricks, who supported Ani every step of the way through her treatment journey. Surya would also like to mention Ani’s former brother-in-law Bill Marx and his daughter Laura McGrath, who helped Ani tremendously during her cancer treatment. Ani was preceded in death by her parents, Rose and Michael Molnar, and is survived by her siblings Louis Molnar, Zoltan Molnar, Gerrie Molnar, Maryann Mesday, Rosalind & Stanley Ogrodnick, and Margaret Molnar. A celebration of Ani’s life will be held on September 11, 2021 at 11AM at the Fallsington Friends Meetinghouse, followed by a potluck reception. In lieu of flowers, the family requests that donations be made in Ani’s name to the Peaceweavers or Fallsington Friends Meetinghouse.

The family of Antoinette Molnar created this Life Tributes page to make it easy to share your memories.

After courageously fighting cancer for many years, Antoinette...

Send flowers to the Molnar family.